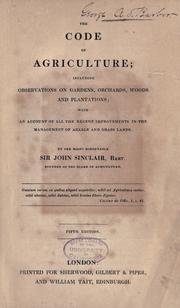 The County Surveys project is closely related to EDINA’s Statistical Accounts of Scotland service, for together the surveys and the accounts form the foundations of Sir John Sinclair’s ambitious ‘pyramid of agricultural enquiries’. The insights and lessons gleaned from these extensive reports were collected in Sinclair’s 1817 book The Code of Agriculture, the pinnacle of his pyramid, which represented the culmination of decades of work with the aim of ‘rendering, a general knowledge of the principles of husbandry, more easily accessible’.

Although they both belong to one larger vision however, there are significant differences between the Statistical Accounts and the County Surveys. Most obviously, they focus on different geographical entities. The Statistical Accounts are concerned with individual parishes and are confined to Scotland, while the Surveys broadened the scope of the enquiries across Britain and Ireland and considered farming practices and land management at the level of county. They therefore provide information about much greater and more diverse areas, enabling comparison across different regions and nations. In this lay their value: the aim of the enquiries was to excite the spirit of ‘improvement’ across the land and, by comparing practices, farmers and landowners could pool their knowledge and share the benefits of others’ experience. Some of the surveys were published with appendixes encouraging such cross-pollination of ideas and methods, for example the General View of the Agriculture of Northampton contained a comparison of ‘the English and Scotch Systems of Husbandry, as Practised in the Counties of Northampton and Perth.’

Another significant difference between the parish accounts and the surveys lay in their authorship. The accounts were written by local ministers: living among the communities they described, they knew intimately the circumstances of their flock but were often less  informed about the other subjects on which they were tasked to report. This led to some far-fetched speculations and assertions, such as the fantastic tale of a (non-existent) loch, reportedly 100 fathoms deep, at the summit of Meallfuarvonie, a hill in Glen Urquhart.  As David McVey puts it,  ‘simple facts of topography and natural history ,[…] sometimes wander into the realms of folklore in the [Old Statistical Accounts] – a warning, perhaps, to approach other information with some caution.’ And, as McVey goes on to point out,

‘sometimes what is omitted is more telling than what is included. In the entry for the Parish of Golspie, scene of some of the most notorious incidents in the Highland Clearances during the early 19th century, the Revd Alexander MacPherson made no mention of the resulting hardship, merely commenting that there had been a decline in the parish’s population occasioned by agricultural improvements. He did, however, indulge in several purple passages of praise for the House of Sutherland, the sole landowners in the parish.’*

These biases, inventions, and idiosyncrasies are part of what makes the accounts such rich resources for historical research.

In contrast, the surveys were commissioned from laymen rather than clergy, sometimes surveyors but often ‘intellectual farmers’ and others who had a professional interest in agriculture. If they are less idiosyncratic, however, their authorship is no less revealing in terms of prevailing attitudes and social and moral codes. Consider, for example,  William Aiton’s impassioned attack on the country ‘sports’ of Ayrshire.  Describing ‘low jockies’, who beat their charges to perform, Aiton writes:

I consider it to be unworthy of the noblemen and gentlemen, who patronise these races, to give their money to such men, and for such purposes. […] The races at country towns are still worse and ought to be prohibited. […] The exhibition is calculated to shock the feelings of humanity. Three or four meagre, jaded, lame, starved animals, are mounted upon, by as many unfeeling blackguards in a state of intoxication, galloped on a rough, hard road, for several miles and cruelly cut and bloodied with whip and spur, for the amusement or sport of the rabble that attend. Such exhibitions are unworthy of an enlightened age, shocking to humanity, and none can be innocent who contribute to, or give them countenance.  (William Aiton, General View of the Agriculture of the County of Ayr  p.577)

Aiton’s remarks are illuminating in several respects, highlighting attitudes towards animals, towards the nobility and the poor. They show that the surveyors brought their own opinions and concerns to their reports, creating thick, rich descriptions that offer valuable insights into rural life in the late 18th century.

The Statistical Accounts and the County Surveys are ‘sister’ enquiries rather than twins. They complement and enrich one another, enabling researchers to compare different perspectives at different scales, and local concerns and practices at slightly different historical moments.  Creating an online collection of the County Surveys, a sustainable service like the Statistical Accounts of Scotland, would be a step towards digitally reconstructing Sir John’s pyramid and would enable researchers to easily read across and between both sets of documents, enabling new insights and readings of both.

EDINA is a centre for digital expertise and online service delivery based at the University of Edinburgh.

The University of Edinburgh is a charitable body, registered in Scotland, with registration number SC005336.

County.surveys.blogs.edina.ac.uk (c) by EDINA. This blog is licensed under a Creative Commons Attribution 3.0 Unported License.